Americans are borrowing money again, and consumer credit is at a record high.

Americans are borrowing money again, reaching levels unprecedented in more than a decade.

U.S. consumer demand for car loans and leases, general credit cards and personal loans rose 39% in April from a year earlier, according to data from credit reporting firm Aikefei. The index is also up 11 per cent compared with April 2019. 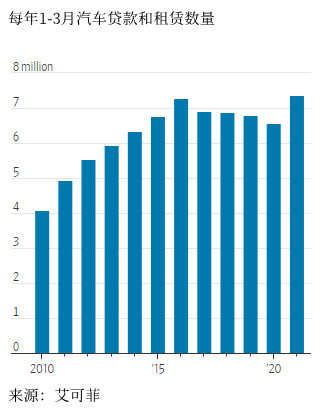 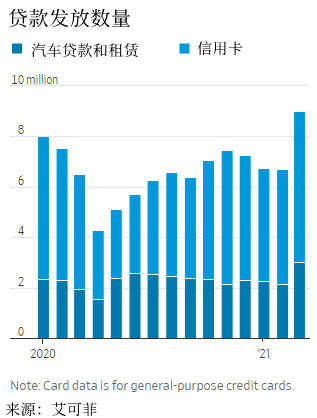 This is in stark contrast to the situation in 2020, when many people avoided taking on credit cards, personal loans and other types of debt.. Some people do not need to borrow money because economic stimulus, increased unemployment benefits and soaring stock markets have filled their gaps. But many people are reluctant to spend money for fear of losing their jobs; others are isolated at home and have nothing to buy.

But with the popularity of vaccines and the reopening of the economy in the United States, many Americans are full of confidence in the economy again. They spend a lot of money on cars, vacations and dining out. Rising prices, especially for cars and trucks, have also boosted demand for loans.

"there has been a significant increase in consumer demand for credit, and people are increasingly willing to use credit to spend their 18-month delayed holiday."

Lenders also say they are more interested in consumer debt. Big banks tightened underwriting requirements at the start of the epidemic, when unemployment soared and default rates seemed likely to surge. Earlier this year, some banks began to relax standards.

In terms of housing, figures released by Mintel comermedia, which tracks loan applications, showed that lenders issued 127 million personal loan applications to people's homes in May, up from 60 million a year earlier.

Since the outbreak began, many Americans have been paying off their credit card debt, a sign that consumers are getting healthier. But this is a problem for lenders that rely on growing lending to make money. They hope that after increasing the number of credit cards issued, more people will have a monthly balance and they will be able to charge interest.

AikefeidataDisplayLenders issued about 3 million car loans and leases in March, an increase of about 53% over the same period in 2020, the highest monthly figure on record. The balance of new models also reached a record $73.6 billion in March, up 59 per cent from a year earlier.

In addition, lenders issued nearly 6 million general-purpose credit cards in March, up 32% from a year earlier and the highest number since records began in March.

It is important to note that these lenders also provide more loans to people with lower credit scores. In March, about 1.4 million general-purpose credit cards were issued to subprime borrowers, up 28 per cent from last year and 25 per cent from 2019.

About 602000 subprime and rental loans were issued in March, up 31 per cent from a year earlier. The balance of these car loans and leases totaled $11.7 billion, an all-time high.

Pat Lynch of Egan, Minn., applied for a $31000 loan from a local credit union in June to buy a 2016 Lexus RX 350. Lynch, a sales manager at a beer distributor, lost his job for about four and a half months last year because of the epidemic. In January, he returned to work. His retirement investment account has risen sharply over the past year. So he can safely spend some of the money he kept in his bank account before the pandemic:

JPMorgan ChaseCredit card spending rose about 17 per cent in May from a year earlier. Gordon Smith, co-president of the bank, said at a meeting in June that he expected the trend to continue throughout the year.

Brendan Coughlin, head of consumer banking, said he expects consumer lending to grow in the next 12 to 24 months, with people running out of the last stimulus spending and then credit card spending. Coughlin said: