Crude oil futures hit a two-year high thanks to the OPEC+ forecast and the situation in Iran's nuclear negotiations.

There may not be a breakthrough in the current round of talks in Vienna on Iran's return to the 2015 nuclear deal.

Crude oil futures in the US market climbed to their highest level in more than two and a half years on the back of OPEC+ forecasts of tighter global oil supply and demand and the absence of a breakthrough in negotiations on Iran's nuclear deal.

At one point, West Texas Intermediate was up 3.8% from Friday's closing level of $68.87, and Brent crude futures exceeded $70. The OPEC+ committee's assessment of the market shows that the excess oil stocks accumulated during the outbreak have been almost exhausted and inventories will decline sharply in the second half of this year.

Traders are still watching the progress of negotiations on the Iranian nuclear deal, which will pave the way for Iran to increase oil supplies if it returns to the 2015 nuclear deal. Iran had previously said it wanted to fully restart the agreement before the end of the government's term in August, raising the possibility that the current round of talks in Vienna would fail.

"OPEC expects supply to be tight, Iran remains the focus of wrangling, and against a backdrop of soaring demand, everything except India is good for oil prices," said John Kilduff, a partner at Again Capital LLC. 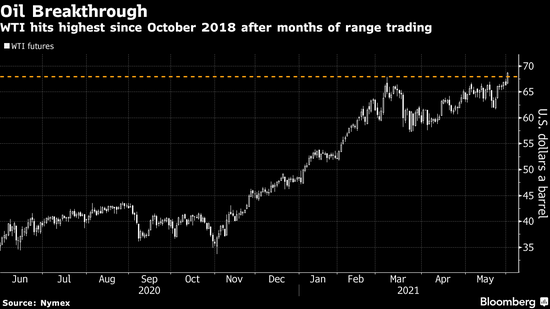 "there are clear signs of improvement on the demand side," Saudi Energy Minister Abdulaziz Ben Salman said at the start of the meeting. Russian Energy Minister Novak talked about "gradual economic recovery."