美股前瞻 | 美联储梅斯特：支持7月加息75个基点；​高盛开始唱空：美股业绩正走下坡路
Outlook for US stocks | Federal Reserve Mestre: support for raising interest rates by 75 basis points in July; ​ Goldman Sachs Group begins to short: the performance of US stocks is going downhill

'We will see a slowdown in economic growth this year, with high inflation having a negative impact on consumer confidence, 'Mr. Mestre said. In order to curb inflation, it is necessary to continue to raise interest rates, which we hope to see above 4% next year. The focus of the discussion in July will be 50 or 75 basis points, which he himself supports. Us inflation is likely to rise further, but a recession is not expected.

Shalit, chief investment officer of Morgan Stanley, wrote in a research paper on Tuesday that the likelihood of the US economy falling into recession this year has doubled to more than 50 per cent in recent weeks under the influence of sharp interest rate hikes and hawkish forward-looking guidance from the Federal Reserve. However, Shalit also mentioned that the good news in the bad news is that if the US economy does fall into recession this time, it is likely to be a mild recession.

As Fed officials have recently stepped forward to play down the risk of recession in the United States, Philipp Hildebrand, vice chairman of Blackrock, the world's largest asset management company, said on Tuesday (28th) that US inflation may have peaked, but that does not mean that the Fed can keep prices at its target level without causing significant economic damage. 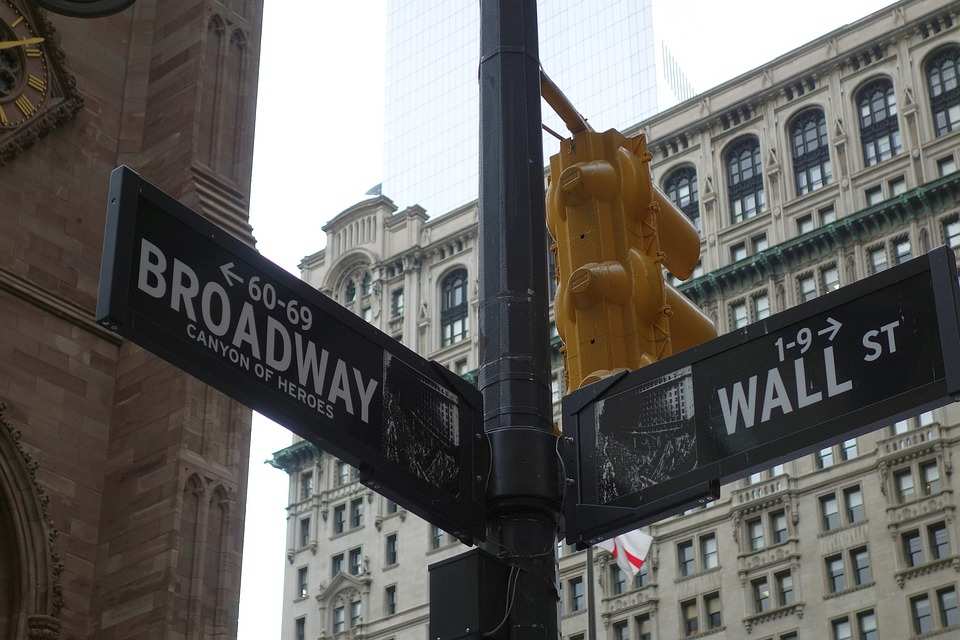 As of Friday, the s & p 500 was up more than 6% from its trough in 2022, but about $10 billion was withdrawn from equity funds, according to data compiled by Bloomberg. Capital outflows are further evidence that investor sentiment is deteriorating after the failure of the once successful bargain-hunting strategy. In the past two weeks, hedge funds tracked by Morgan Stanley have cut their exposure to stocks to their lowest level since 2009. At the same time, individual investors abandoned their long-standing bullish stance and sold shares at the fastest pace in nearly two years.

On Tuesday, June 28, US Eastern time, the media introduced aid to people familiar with the matter.$Tesla, Inc. (TSLA.US) $Hundreds of employees will be laid off along with the closure of California's self-driving department. The employees involved in the layoffs are mainly the team responsible for evaluating customer vehicle data related to self-driving car aids in the San Mateo office, which has about 350 employees, some of whom will be transferred to a nearby organization. As of press time, Tesla, Inc. was down more than 1 per cent before trading. 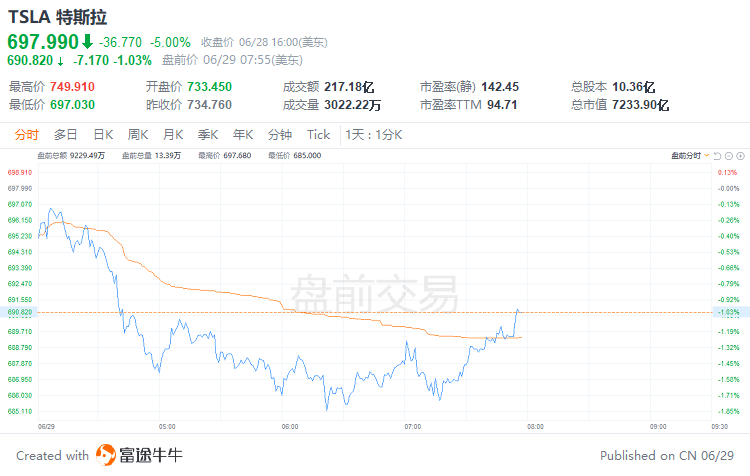 On June 28, Tianfeng International analyst Guo Mingyi said on social media that a survey showed that$Apple Inc (AAPL.US) $The development of self-developed iPhone 5G chip may have failed, which means$Qualcomm Inc (QCOM.US) $It will be the only supplier of 5G modem chips to iPhone in the second half of 2023. Guo Mingyi said that as the current Apple Inc chip can not replace Qualcomm Inc, Qualcomm Inc's revenue and profits in the second half of 2023 and the first half of 2024 will exceed market expectations. By the time Apple Inc's home-made chips replace Qualcomm Inc chips, Qualcomm Inc's other new business should have grown enough to significantly offset the negative impact.

Australian lithium miner Liontown Resources Ltd announced Wednesday that it was working with the United States.$Ford Motor (F.US) $A binding formal off-take agreement has been reached. The initial term of the off-take agreement is five years and is expected to begin in 2024. Liontown's Kathleen Valley lithium project will supply Ford with 75000 dry tons (DMT, weight after moisture) of spodumene concentrate in the first year, increasing to 125000 dry tons in the second year and 150000 dry tons in the third to fifth years. In addition, Liontown signed a binding financing agreement with Ford and secured A $300m worth of debt financing for further development of the Kathleen Valley project.

JPMorgan Chase & Co downgraded his profit forecasts for large listed technology companies, especially those with online advertising business, due to macroeconomic pressures, exchange rate problems and company-specific conditions. JPMorgan Chase & Co analyst Doug Anmuth wrote in the report that although the Internet industry continues to maintain long-term growth, it is much more mature than in 2008-09, and its ability to resist macro trends is "more limited".$Snap Inc Inc (SNAP.US) $、$Alphabet Inc-CL C-C (GOOG.US) $、$Meta Platforms (META.US) $和$Pinterest (PINS.US) $Profit forecasts and target prices to guard against the impact of the economic slowdown on advertising spending. As for e-commerce stocks, he said that Amazon.Com Inc should increase the share of retail sales in the recession, thanks to low prices, more choices and fast distribution, but it may be affected by weak spending.$Amazon.Com Inc (AMZN.US) $、$eBay (EBAY.US) $和$Farfetch (FTCH.US) $The target price.

$Beyond Meat (BYND.US) $It is preparing to launch a sliced steak product to expand the company's vegetable meat lineup to boost weak sales. The company CEO Ethan Brown said it plans to launch the steak in retail stores this year and eventually in restaurants. "this is probably one of our best products so far," CEO said. As of press time, Beyond Meat was up nearly 1 per cent before trading.

As of the press release$NIO Inc. (NIO.US) $It fell nearly 6% before trading after the grizzly bear shorted the report, saying it was groundless and considering action to protect shareholders' interests. 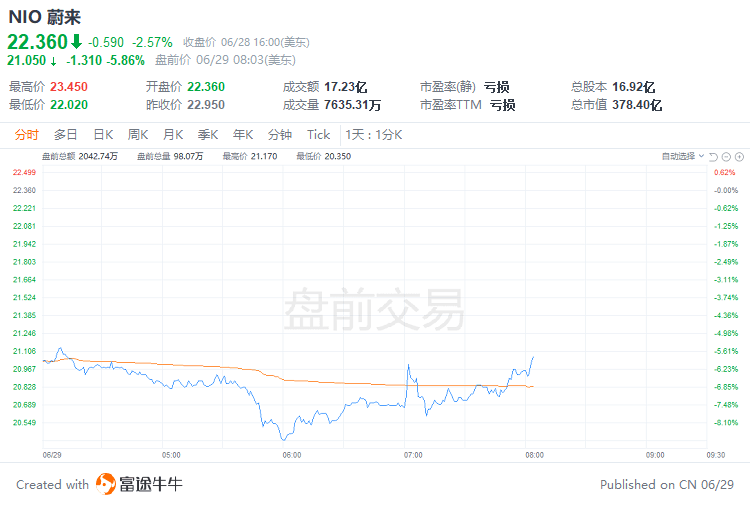 $JD.com (JD.US) $Announcement, the company has been in contact with$Tencent (ADR) (TCEHY.US) $Renew the strategic cooperation agreement for a period of three years. Tencent will continue to provide significant primary and secondary access portals to the Company on its Wechat platform to provide traffic support, and the two sides also intend to continue to cooperate in the fields of communications, technical services, marketing and advertising and membership services. As part of the total consideration, JD.com will issue a certain number of Class A common shares to Tencent at a specific predetermined date during the three-year period with reference to the current market price, with a maximum consideration of US $220 million. As of press time, JD.com fell slightly before the day. $Full Truck Alliance Co. Ltd. (YMM.US) $According to the official Weibo Corp, over the past year, the company has seriously cooperated with the national network security review, took seriously the security problems found in the review, and carried out comprehensive rectification. With the consent of the network security review office, the registration of new users of "full capacity" and "truck gang" will be resumed from now on. In the follow-up, the company will take effective measures to ensure the safety of leveling facilities and big data, and maintain national security. As of press time, Full Truck Alliance Co. Ltd. was up nearly 7 per cent before trading. $KANZHUN LIMITED (BZ.US) $Weibo Corp reported on June 29th that over the past year, our company has seriously cooperated with the national network security review, took seriously the security problems found in the review, and carried out comprehensive rectification. With the consent of the network security review office, the registration of new users of "KANZHUN LIMITED" will be resumed immediately. In the follow-up, the company will take effective measures to ensure the safety of platform facilities and big data, and maintain national security. As of press time, KANZHUN LIMITED was up more than 4 per cent before trading. 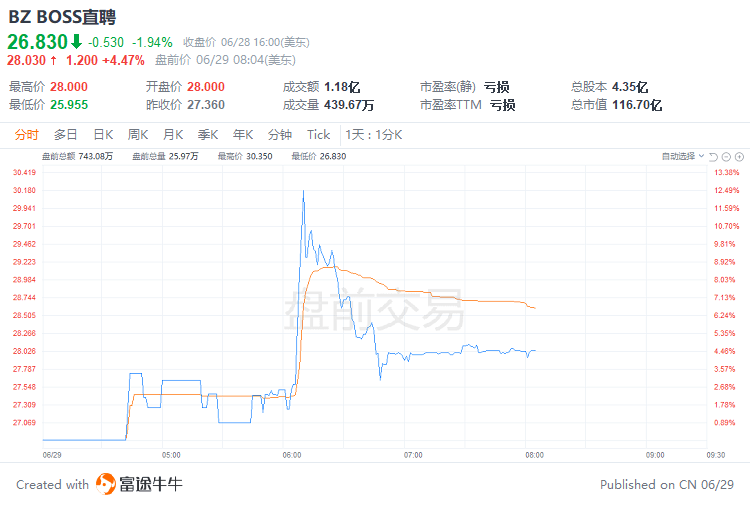 Morgan Stanley released a research report saying that maintenance$TRIP COM GRP LTD (TCOM.US) $The "overweight" rating raised this year's revenue forecast by 30 per cent, the first significant increase since 2020. The non-General Accounting Standards (non-GAAP) net profit excluding other income is currently expected to be Rmb800m, compared with an earlier forecast loss of about Rmb1 billion, and the target price is raised from US $30 to US $35, which is believed to be one of the largest lagging shares in the global tourism-related industry.

Pre-market turnover of US stocks TOP20 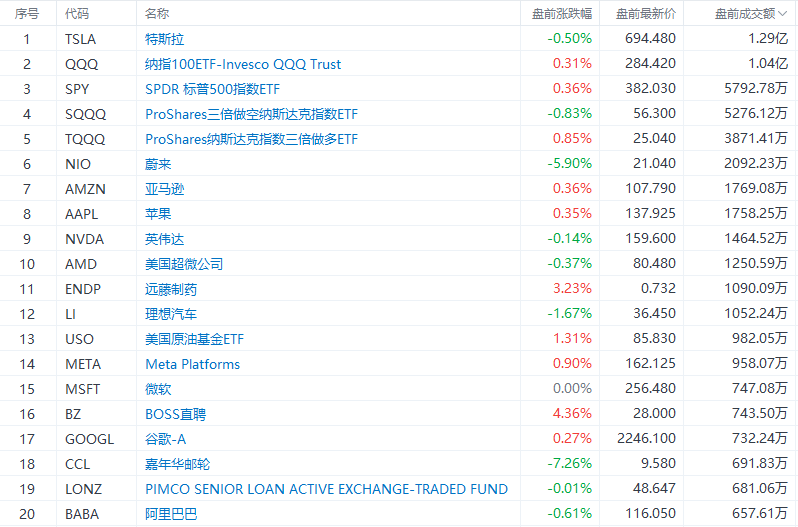 20:30 final actual annualized quarterly rate of GDP in the United States in the first quarter

20:30 the final annualized quarterly rate of the US Core PCE Price Index for the first quarter