Central banks may have to turn to doves again after turning hawkish for a while.

The index used to measure growth in the bond market has issued an ominous warning as central banks around the world have raised interest rates near historic lows.

Traders speculate that interest rates will rise by up to 161 basis points next year against the backdrop of the cost of living in developed countries such as the UK, New Zealand and South Korea, as well as soaring commodities. 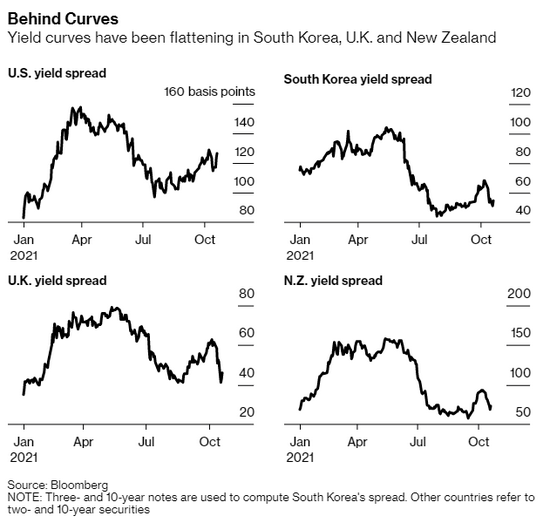 The Fed has distorted the yield curve signal through bond purchases for more than a decade, but as the yield curve index tends to be in line with other growth indicators, and stagflation has become a hot topic on Wall Street, investors began to considerIf such rapid austerity is achieved, will it damage the recovery that has just improved?

"the surprise of slowing economic growth may outweigh that of rising inflation, and then we will fall into a situation where the central bank becomes a hawk and has to become a dove again in a year or so."

In the UK, concerns about a weak currency are particularly acute. While the UK is grappling with the severe economic impact of Brexit and the rebound of COVID-19 in the winter, traders expect the Bank of England to raise interest rates by more than 100bp by the end of 2022, making it the most aggressive rate hike cycle of the century.

Concerns have had an impact on the pound, which fell to its lowest level this year in September. Although the British economy has begun to recover, traders are still trying to figure out the impact of higher interest rates on economic growth andWhat the pound means. 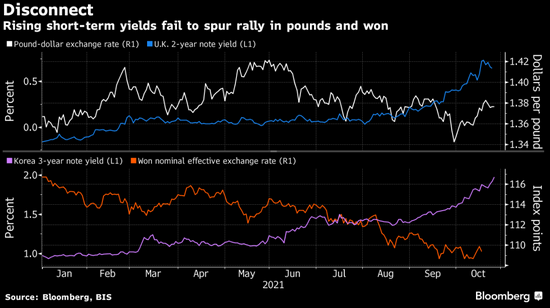 Prashant Newnaha, a strategist at TD Securities in Singapore, said:

"given that other central banks are likely to follow suit to raise interest rates, the upside of the New Zealand dollar should be limited."

The same is true in emerging markets, where currencies are at their lowest level since March 2020 relative to local average bond yields. The phenomenon suggests that investors see the attractiveness of rising interest rates as a hedge against slowing global growth and accelerating inflation.

Is it appropriate to raise interest rates now?

Markets are still overwhelmed by the question of whether an economy is strong enough and how much borrowing costs it can afford. If energy costs fall and supply chain problems ease, will inflation fall back below the Fed's target?If it does fall back, it may lead to the end of the interest rate hike as soon as possible.

"I have a feeling that central banks are ahead of their actions and the market is signalling that it is too early to raise interest rates."