Morgan Stanley: us stock prices have not yet reflected the fundamentals, and the bottoming strategy may fail.

Morgan StanleyThe Fed's bond retrenchment may accelerate faster than expected, and its bargain-hunting strategy has been put to the test.

Morgan Stanley said his strategic process for US stocks has several key components.The most important thing is to pay more attention.CK HutchisonThe fundamentals of valuation to determine whether the overall market is attractive and which industries and styles look best.The rate of change of the growth rate is more important than the absolute level. Morgan Stanley uses a market-based equity risk premium framework, which will work well as long as the correct system is applied when using it.

In this regard, Morgan Stanley is keen to study market cycles and believes that historical analogies may be helpful. For example, the mid-cycle transition narrative that has worked well since March comes directly from its study of historical economic and market cycles. The last component that Morgan Stanley spends a lot of time studying is price, that is, technical analysis.

According to Morgan Stanley, markets are not always efficient, but they are usually very good leading indicators of fundamentals (the ultimate driver of value). This is especially true if you are focused on industry and style leadership and the relative strength of individual securities. In short, Morgan Stanley found that these internal data are much more useful than simply looking at major averages.

This year, Morgan Stanley believes that this process has fulfilled its promise because price movements are in line with fundamentals. More specifically, cyclical stocks dominated growth stocks during the most accelerated early stages of the economic recovery in the first quarter. Since March, leaders of high-quality large-cap stocks have shown what they expect to happen-a slowdown in growth and a tightening financial environment.

For many investors, the question now is whether price movements already reflect these basic results. According to Morgan Stanley, the short answer is no.

One reason for the weakness in the stock market a few weeks ago has to do with concerns about the Fed's tapering of asset purchases. The Fed did not disappoint the market and is expected to scale back its bond purchases this year. But surprisingly, it expects to end the curtailment of bond purchases by mid-2022. This is about 1/4 earlier than the market expected, increasing the possibility of raising interest rates in the second half of this year, which is a clear hawkish shift. 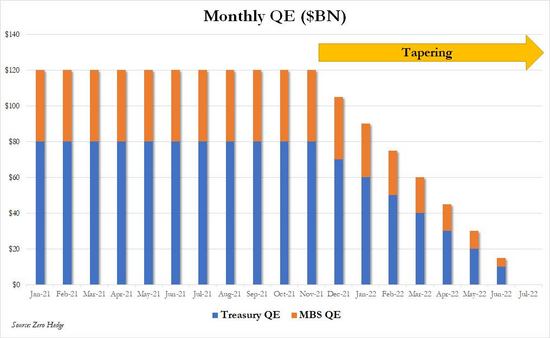 Real yields on 10-year Treasuries rose 12 basis points in two days after the Fed interest rate meeting and are now up 31 basis points in just eight weeks. In addition, the dollar is stronger. Both put heavy pressure on the stock market. A rise in real interest rates means a fall in share prices.

Second, even if the stock market as a whole falls, value stocks may outperform growth stocks. This makes the investment environment more difficult, given the positions of most investors.

Finally, the most powerful offset to the sharp correction in the S & P 500 this year is the highly flexible bargain-hunting mentality of retail investors, a strategy that is now being challenged. The stock market bottomed out last month and broke through its previous lows, with the first bargain buying not working and breaking through important technical support.

Over the past month, Morgan Stanley's strategy has been to focus on defensive quality sectors such as health care and staple foods, as well as financial stocks.Defensive stocks should be better supported as slowing economic growth and rising costs begin to put pressure on earnings correction, while financial stocks can benefit from a rising interest rate environment.

On the other hand, non-essential consumer stocksDue to excessive consumption last year, such stocks are particularly vulnerable to the return on demand. In this area, Morgan Stanley prefers services to goods because it believes that there is still some pent-up demand in the commodity sector. Some technology stocks affected by working from home may also have higher-than-average earnings risks, and now that trend is fading. Within the plate, we are most concerned about semiconductors and are neutral as a whole.